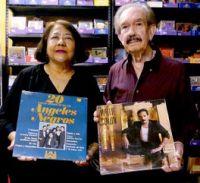 The record store Música Latina is on its 43rd year of operation in the City of New Orleans and it is probably the oldest Hispanic-owned business that has remained opened and still operates in the city.

The owners of Música Latina are Juan Suarez and Yolanda Estrada. Their store has always been on Magazine Street, although in different locations. Of how his business took off, Suarez said, “I ran into a friend while I was in Los Angeles who gave me a large amount of records and told me ‘here you go, you can sell these’”. Suarez also added, “I told my sister and my sister-in-law to help me and they began to make some phone calls”.

The news about the availability of music in Spanish in the city had such a huge impact among the Spanish-speaking community that all the records immediately sold out. The store officially opened its doors in July 1969 at 2035 Magazine Street, only a few steps from the Happy Hour movie theatre.

Mrs. Estrada, who already knew the Suarez family, began working with them soon after they opened. During its climax, the record store was the main entertainment reference for the local community. The first musical event Música Latina sponsored took place in December 1972 when musicians Los Chavales de España performed at the Rivergate, the most prominent venue at the time, located at the foot of Canal Street, where Harrah’s Casino is currently located.

Música Latina also organized children’s parties during King’s Day. They were so big that the owner of the neighboring theatre began helping by aiding in organizing the party and by showing free movies in Spanish. After the 1976 earthquake in Guatemala, the owners of Música Latina mobilized a network using a shortwave radio transmission with WMJR radio station.

Suddenly, there was a line of people waiting to make a phone call to their relatives that stretched beyond the small radio station studio. After a short recess following a fire, Música Latina opened its door again at 4226 Magazine Street where they remained for a long time.

Música Latina has kept an enviable national and international clientele, even before the advent of the Internet, with fans of all music genres that came from all over the United States, and even in other countries like Germany and France. The owner of a French radio network would travel to the store yearly to buy dozens of records.

When asked about her biggest satisfaction with the record store, Mrs. Estrada responded, “knowing so many people and listening to so much music. It is not just a business, it is a great family”.

More in this category: « Mofongo A Blast from the Past »