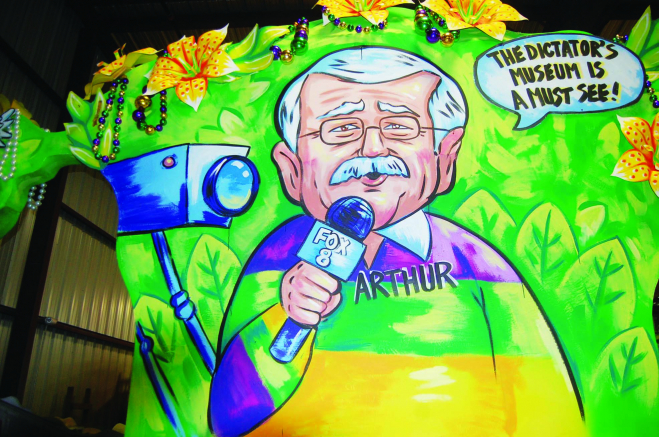 New Orleans is known worldwide for its nightlife and, during Carnival season, for its colorful costume parades and parties on its busy streets. Mardi Gras is not only a big party in the Big Easy, but it is also a deep-rooted tradition that makes our city the most magical of all.

Arthur Hardy, recognized as the leading authority on New Orleans Mardi Gras, is a fifth-generation New Orleanian. Since 1977, Hardy has shared his knowledge of Mardi Gras while appearing on all local and various national media. This time he addresses a bicultural audience for the first time to share the meaning and history of the New Orleans Carnival.

The beginning of Carnival

January 6, Three Kings Day, also known by Christians as “Epiphany,” marks the official start of the Carnival season. Carnival comes from the Latin “carne levare,” meaning “farewell to meat.” Hardy reminds us that the carnival season can be as long as 63 days, always culminating on Fat Tuesday, the day before the important day of repentance in the Catholic tradition of Ash Wednesday. It is that last day of carnival, Mardi Gras, when people opt to party and feast on the famous Bourbon Street.

During this season, it is also tradition to enjoy the famous King Cake, which includes the surprise of a plastic baby. The person who gets the piece with the baby in it becomes the king or queen for the day. According to Hardy, that’s the good news. “The bad news is that person has to buy the next cake or throw the next party, so it’s a fun tradition.” King Cake is the flavor of Mardi Gras, and “hundreds of thousands of King Cakes are shipped out of town to give people a little taste of the Mardi Gras season,” adds Hardy. 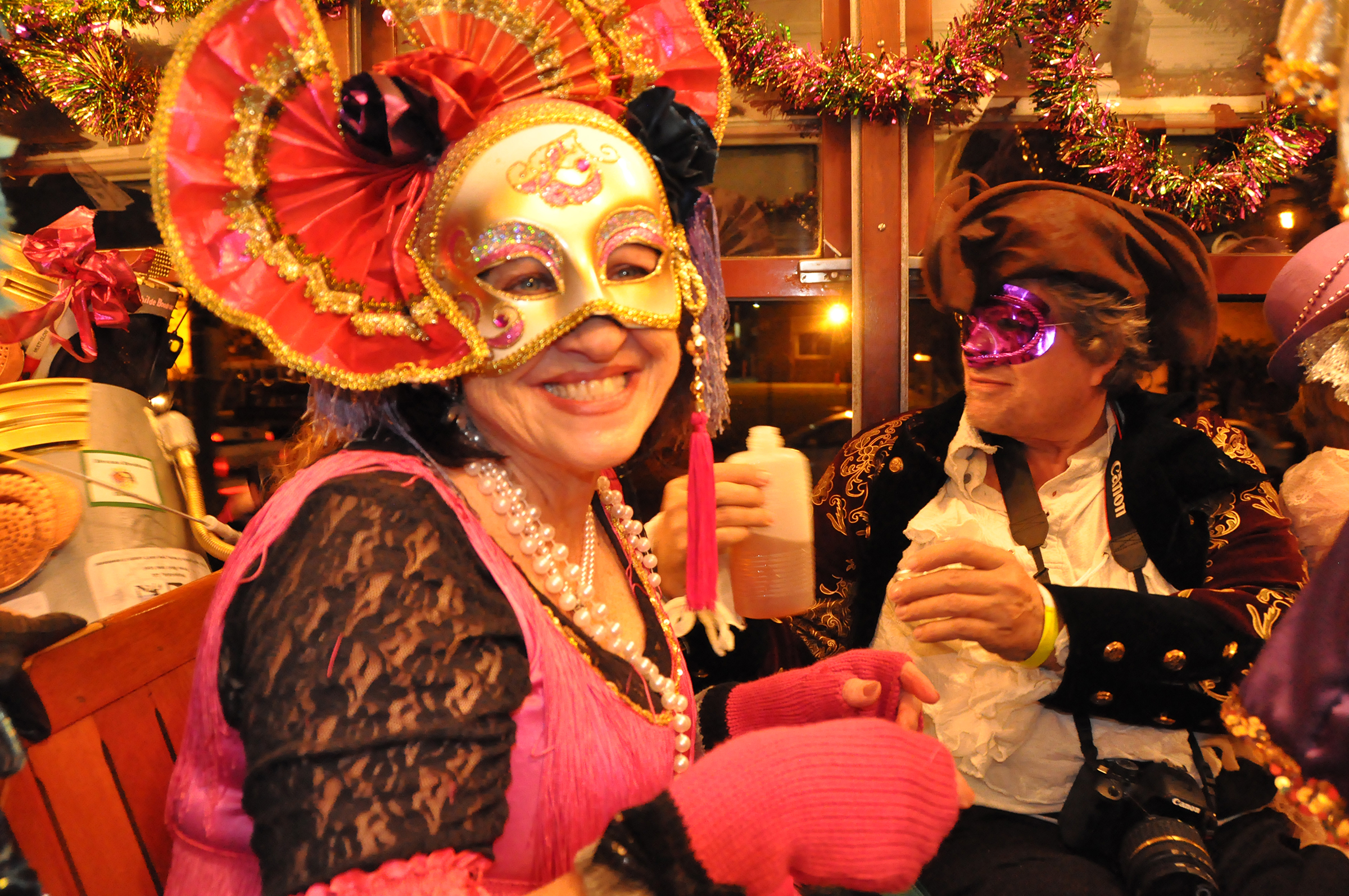 Krewes through the years

Krewes are another vital component of the Mardi Gras celebration. Hardy reminds us that the first krewe began in 1857. It was a group of white men, mostly very wealthy, who practically ran the city and society. This krewe was a free party for visitors and its residents. Since then, it has become a more diverse and inclusive celebration. “It started small, and now it’s big. It was exclusive, and now it’s inclusive. Women have taken over within the last ten years. Women now lead large krewes like Muses,” says Hardy.

Some of the oldest krewes that continue today maintain their traditions. Rex, established in 1872, is the oldest parade, which this year celebrates its 150th anniversary. Comus was the first parade, but now they only have the gala that represents the closing of the carnival on the night of Mardi Gras. The carnival ball is a unique experience. “These are all traditions where for one day you can be a queen or a king, it’s all a fantasy, but it’s fun, and in New Orleans, we take fun seriously.”

A celebrity always represents the King of Bacchus and, instead of the traditional ball, there is a big party at the Superdome,” Hardy relates. 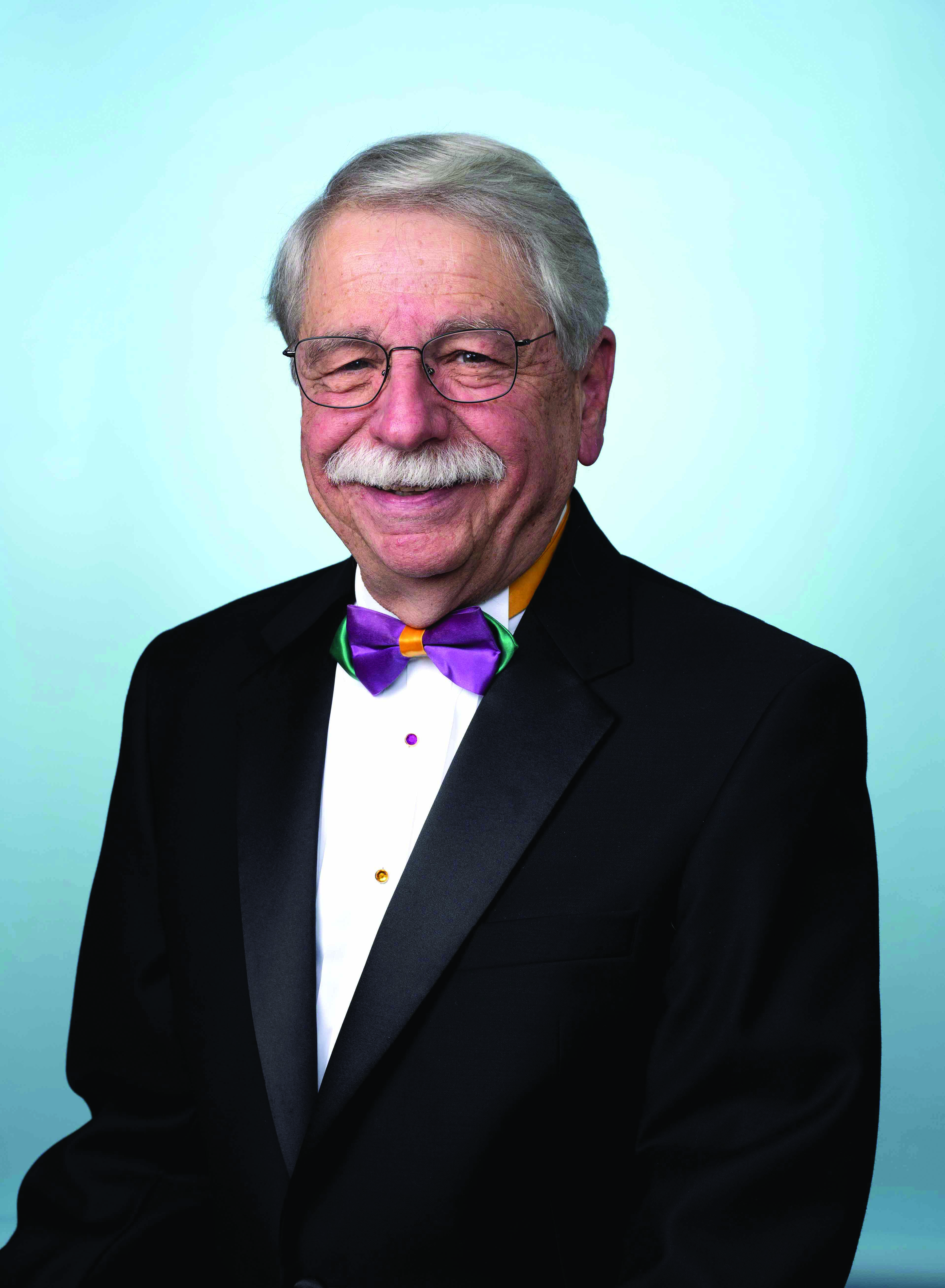 Zulu, a parade whose members are African American, was the first parade to include white people as guest passengers on its floats, and its tradition has wearing blackface. “It’s a controversial thing; some people think it’s undignified,” says Hardy, who doesn’t see this tradition as a controversy. “It’s what we’ve done since 1910. We think it’s fun, so if you don’t like it, don’t come. I like that attitude, don’t tell us how to celebrate, we know what we’re doing, and we have fun. If they don’t get it, tough luck.”

Rex’s krewe chose the representative colors of the Mardi Gras Carnival. Hardy reminds us that the meaning of each color comes from the Catholic Church. Purple represents justice, green represents faith, and gold signifies power.

Throw me something, mister!

Each float has tokens members throw to carnival-goers as souvenirs.

The doubloon is one of the oldest objects, introduced in 1960 by the Rex parade. This coin is a favorite among collectors and is made of aluminum and comes in various colors, the most predominant being purple, green, and gold.

Plastic cups and beads are also popular during Mardi Gras. They usually have the krewe’s logo, the float’s name, and the year.

Handmade throws include the famous Zulu hand-painted coconuts and the Muses’ shoes decorated and designed uniquely, with lots of shine and personality by its members.

Toys are also crucial for the children in the crowd. Some of them have the krewe’s emblem, and although they do not have a historical significance as the doubloon, they are lots of fun to try to grab. 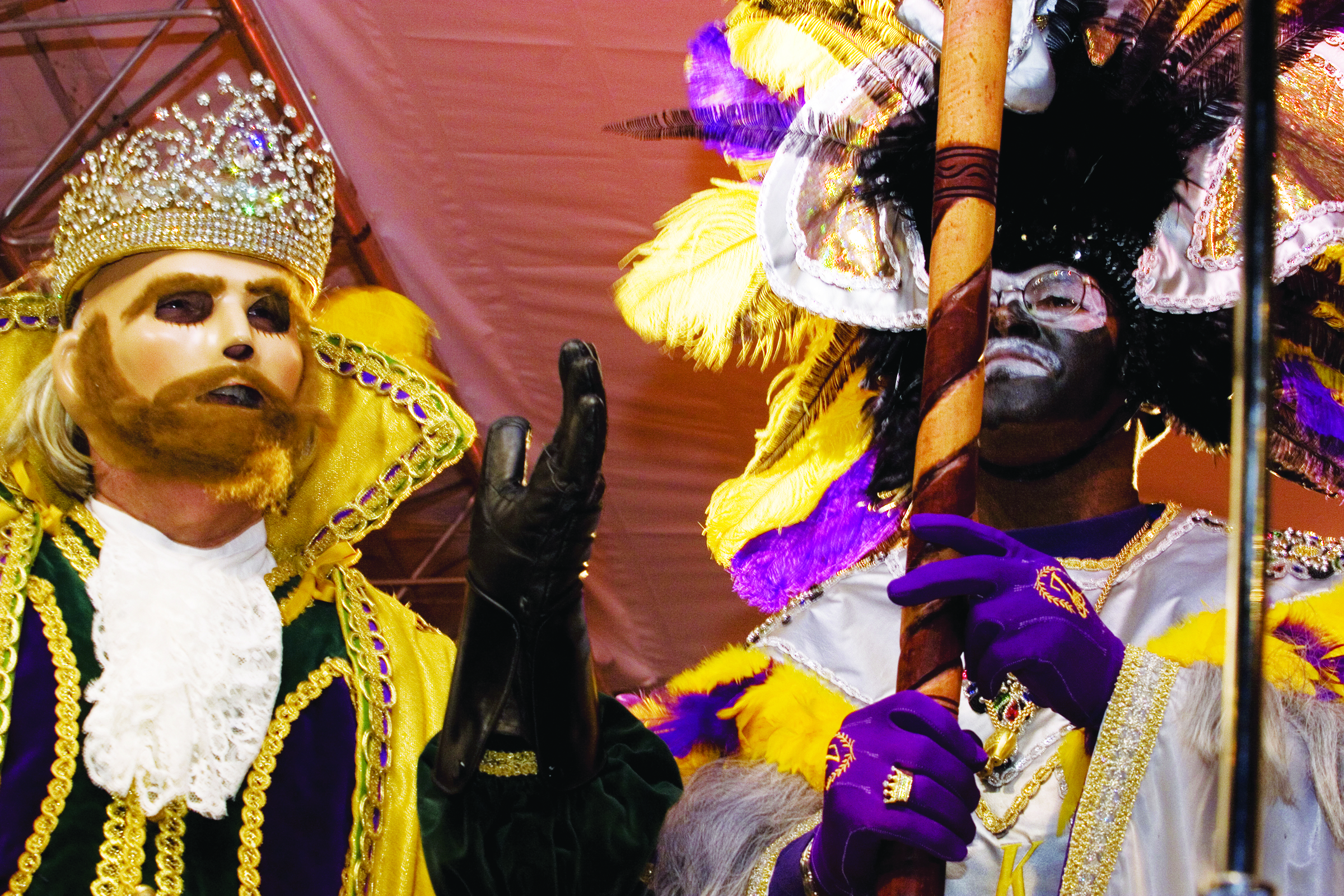 The meeting of the kings

Lundi Gras is the annual meeting between the King of Rex and Zulu, representing the opening of the Mardi Gras festivities. This tradition that existed many years ago resurfaced when Errol Laborde, publisher and editor of New Orleans magazine, came up with the idea of hosting a Monday night event to bring people back to be part of the celebration. “Now on Lundi Gras, it’s a huge deal. Parades in the evening, Rex and Zulu’s landing at the foot of the Mississippi River. It used to be a slow carnival day to get ready for Fat Tuesday, but now it’s a big celebration.”

Hardy believes that Mardi Gras is such a big celebration that it has no room to grow any bigger, although he acknowledges that there are always ways to innovate and improve it. Carnival is also a significant economic driver for New Orleans and the state of Louisiana, which, according to Hardy’s research, no one has been able to measure accurately. “It’s big business. When we lost Mardi Gras last year, it was devastating to many people. So I think this year will be a very successful Mardi Gras.” Hardy believes that Mardi Gras is better now than it used to be. 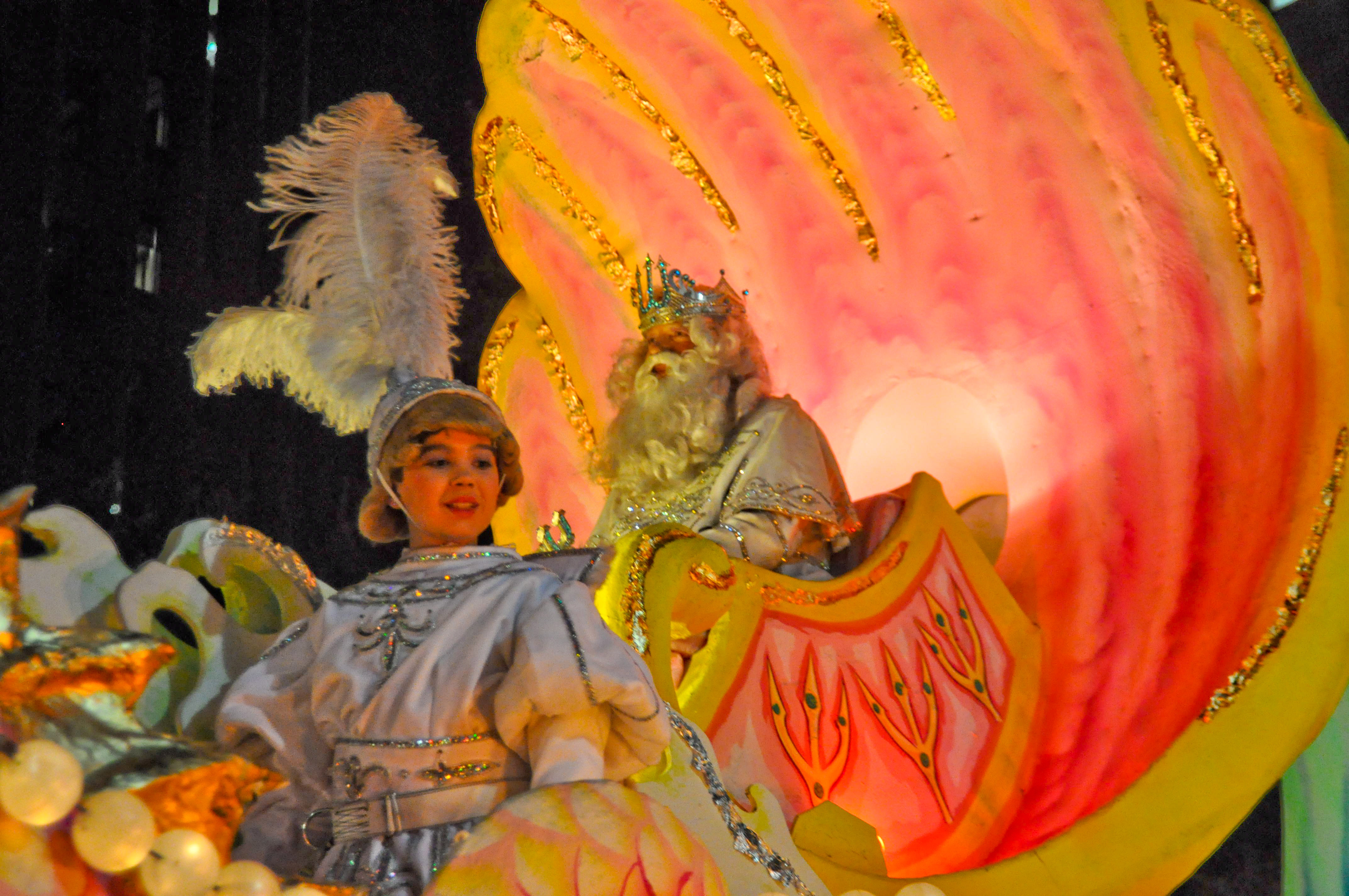 Hardy, who has participated in parades, shares one last thought about what Mardi Gras means to us in our city. “Mardi Gras is a warm and wonderful thing. I’ve never tired of it. If you can’t have a good time during Mardi Gras, check your pulse.”

Replace Soda with Herbal Drinks to Cool the Body