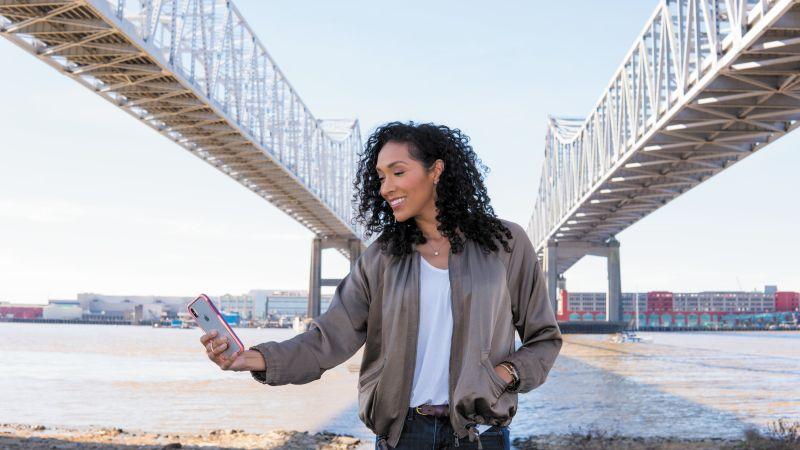 Rocio Mora is a bilingual vlogger and a master at teaching people how to take care of natural hair. With Risas Rizos, her YouTube channel that started in 2014, she has close to 150,000 subscribers. The channel, named as a Spanish wordplay for "laughs" and "curls," focuses mainly on the natural care of curly hair, and it also offers product reviews, make-up tutorials and general beauty tips.

Mora was born in Baltimore and moved to New Orleans as a toddler, where she grew up surrounded by her Honduran and Mexican families. This tall and lean Latina beauty models from time to time and has dabbled into TV hosting.

She started making video blogs to save time, instead of repeating the story over and over to relatives and friends about what she had done to revive her curls that were lost due to heat damage. Mora followed her cousin’s advice to make a video and she uploaded it to YouTube.

The natural hair movement was trending in the African American community, but Latinas were not into it yet. Risas Rizos vlogs targeted a niche market that was perfect for companies to extend their customer base to U.S. Latinas and to Spanish-speaking women in Latin America. Risas Rizos gained subscribers almost immediately and viewers were asking questions that prompted to more and more videos. Soon after, brands reached out and Mora’s side job was born.

In her “real” job, she worked as a pipeline drafter at an engineering firm. She was laid off during the oil industry recession that hit Louisiana in 2015, just a couple of days after returning from the “We All Grow Summit,” the first bloggers conference she ever attended. Mora found herself with virtually no options in her career and was forced to take a leap of faith and turn her YouTube hobby into her next career.

Her mother, Juana Mora, encouraged her to go to the Hispanicize conference taking place in Miami the week after Mora was laid off. Not knowing how long she would be without a job, Mora was hesitant to go, but her mother gave her Southwest Airlines points for her flight and encouraged her to go. “Attending this conference was a game-changer because I gained lots of information, made great connections, and was able to meet the Univision Connectors Network,” recalls Mora.

Upon return, she chose to stop the job hunt and devote all her time into growing her digital footprint and her Risas Rizos brand making videos day after day without knowing if she would get any return.

She had to keep a strong mindset to ignore friends and family who were advising her to go back to school and find other jobs. But she saw the potential, although she admits it was tough in the beginning. “The hardest part was not knowing what was going to happen next. I had never NOT worked for anyone else and was used to knowing what was coming ahead. Being an entrepreneur, you can hope, you can plan, but you just never know…”

The first brand that reached out to Risas Rizos was DevaCurl. “They were thanking me for my honest review of their products and gifting me more products to potentially review,” said Mora. Then, the sponsorships started coming. The first brand that paid Mora for a post was Shea Moisture. Risas Rizos still works with them and since then, Mora has done campaigns for beauty brands such as Neutrogena, Proctor & Gamble’s various product lines, Ulta Beauty, and Dove, to name just a few.

Although the job of an influencer seems glamorous and easy, there is a lot that takes place to create sponsored posts. Mora spends her days creating the concepts and she records and edits her vlogs. She also books photographers and video crews from certain jobs, handles the administrative aspects of her company and goes back and forth with clients during the campaign approval process. A simple one-minute video can take hours to shoot and days to edit. “There are many sleepless editing nights and a lot of the time you have no one to help you,” Mora says.

Mora is very proud of having successfully pitched a campaign for a brand that had nothing to do with beauty. Last year, she went on a tour called Rizos On the Road Presented by Kia Motors, which was a series of events in Miami, New Orleans, Houston, Los Angeles, Chicago and New York. The events celebrated being Latina and Afro-Latina in the natural hair space and community. “I presented the idea to Kia Motors of America and found an organic angle to create the tour and was able to bring additional hair brand sponsors that all believed in the message behind our project.”

To Mora, the fact that a national brand like Kia would help facilitate a dialogue and conversations about diversity and inclusion for Latinos and the struggles many Latinos had embracing their own history and roots, is a great accomplishment that goes beyond marketing and validates what being an influencer is really about.

Last September, Mora was chosen by the New Orleans Marketing and Tourism Corporation as the face of their biggest Hispanic Heritage Month marketing campaign. Mora was featured in blogs and videos on the GoNOLA website and told locals and tourists alike about Hispanic heritage in the city, where they could find all things Latin and gave an itinerary of her favorite things to do. “I’ve always had a love for my Latino community here and New Orleans has always been my favorite city in the world so to work on a campaign that had to do with both of my loves was an honor,” said Mora about working on her first local campaign.

The evolution of her brand and the expertise she has acquired during her years as a digital influencer have awakened a need for new goals. Mora would like to “act as a bridge of sorts to reconnect Latinos to the soul of New Orleans and to show the rest of the city the many contributions Latinos have made to amplify the beauty and culture of New Orleans.” Her local influence is growing, and she was recently working on her second local campaign for Mignon Faget.

Working long hours, believing in her vision, and finding her niche have taken Rocio Mora beyond what she could ever have imagined when she began making videos for fun.

Mora’s advice to any entrepreneur is to always make good connections. “You just never know where that introduction will lead you,’’ she firmly says. Rocio is focused on doing more local things that could transcend the digital realm, so stay tuned to see what this natural influencer will do soon.