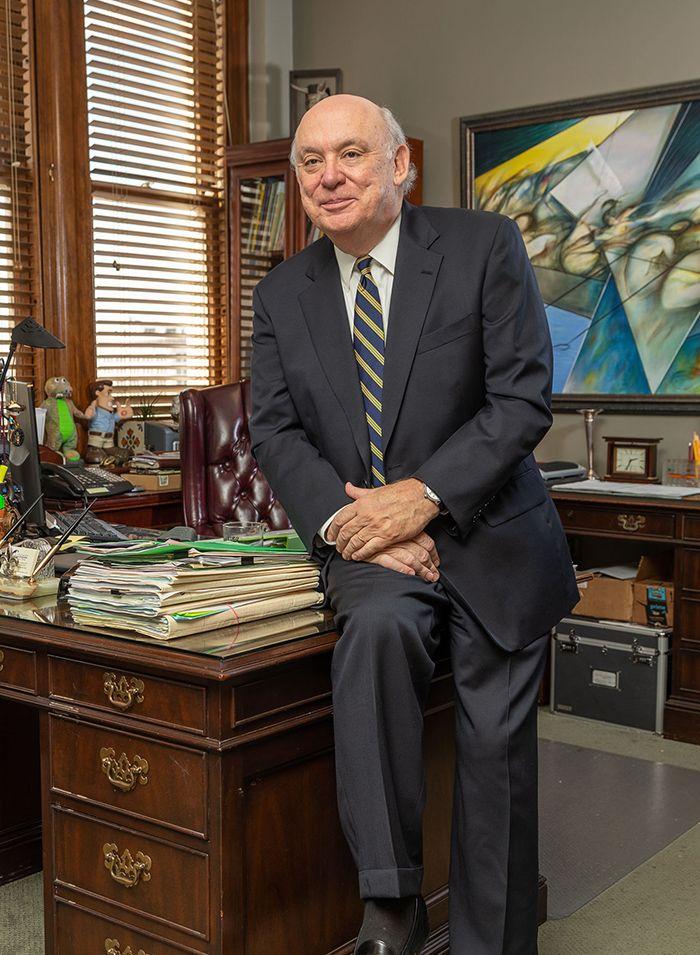 Romualdo "Romi" Gonzalez has achieved great success as a lawyer, but in his heart there has always been a priority to advocate for the Latin American community in the United States, to highlight the best of this culture and to motivate Latinos living in the country to become active members in their communities. School Years. A step away from the war. The law was the path he chose to follow the advice of his father, Reverend Romualdo Gonzales, Bishop of the Anglican Episcopal Church of Cuba, who told him that it did not matter what profession he chose as long as he could help others. After having obtained his English diploma at the University of the South in Tennessee, and having completed a diploma in Spanish Culture at the University of Madrid, he applied to Law School at Tulane University. It was possible that his duty with military service could interrupt his first semester. Gonzalez became part of the army reserve at Tulane's ROTC in 1972, and on December 1st, his birthday, the fear of going to war dissipated when he found out his lottery ticket would allow him to stay in the country and continue his education. Gonzalez obtained his Juris Doctor degree from Tulane University. It was only until he participated in the law clinics required as service hours to obtain his diploma when Gonzalez got to know people in the Latin American community in the city and reconnected with his cultural heritage. That's how he became known among Latino immigrants. He enjoyed working with his community and becoming a resource of help in various ways beyond legal issues.

45 years of law, a lifetime of cases

In his 45 years as a lawyer, he has undertaken hundreds of cases, locally and internationally. One of the most significant in his career was when he represented the families of 14 victims of Pan American World Airlines flight 759 which collapsed on a residential area of the city of Kenner, in 1982. He still has contact with one of his clients, Erica Velázquez Aust, the only employee who survived the tragic New Year's Eve fire in the Casino of the Dupont Plaza Hotel in Puerto Rico in 1989. That day, nearly 100 people lost their lives. Gonzalez achieved the highest amount of all the cases from that event and assisted the family during their stay in New Orleans during medical procedures for her client. The success of these and many other cases has allowed him to dedicate his efforts and time to causes that he is passionate about. "Being part of these causes has been very important for me, but nothing causes me more pleasure than being able to help our people," Says Gonzalez, adding that "this is why I have had the desire to start things that have been good for our community, despite our community."

"Romi" Gonzalez has been the pioneer of countless cultural, economic and civic causes in the city. "The primary goal in my life has been to 'Americanize' our community and expose the best of our culture to the rest of our city, state and country,' and he has achieved it because his profession has allowed him to open some doors. The list in his curriculum of the organizations in which he has participated is extensive. He has been the founder of organizations such as Carnaval Latino, Latin American Chamber of Commerce, The International Cuba Society, The New Orleans Hispanic Heritage Foundation and Jupiter Hispanic Leadership Conference, among others. Some of these organizations continue, some have new names, and some have evolved. Gonzalez has been a member of numerous boards, conferences and commissions such as HISPAC, World Trade Center, NOMA, Mayor Moon Landrieu's Latin American Advisory Committee, National Commission of Hispanic Ministers of the National Episcopal Church, Canal Street Development Corporation, City Building Corporation, and New Orleans Tricentennial Commission, to name a few.

Gonzalez proudly remembers the Jupiter Leadership Conference, where a group of city leaders went on retreat to discuss, plan and find solutions to the most critical problems for the Latino community. The conferences had the presence of expert speakers recognized at the national level who guided important initiatives, such as The New Orleans Hispanic Heritage Foundation.

The origins of the Chamber of Commerce

Being a member of a Task Force convened by the Episcopal Church to do a three year study on the request by the Episcopal Dioceses of Cuba for readmission to the Episcopal church of the United States of America,was very special for Gonzalez. "This was very important to me, as my father was the last Bishop of Cuba before the Cuban Dioceses had to be separated in 1966 from the US church, due to the political fray between the two countries". This reunification is a significant step towards Romi Gonzalez's hope that the relations between the two neighbors would one day normalize.

Carnaval Latino (Latin Carnival) has been one of the many causes that Romi Gonzalez has nursed through the years as a flagship of his efforts to promote Latin culture. Carnaval Latino was conceived in 1989 with the idea of offering a platform to showcase local and international musicians and businesses in the City of New Orleans, and to promote the Latino culture to society in general through a professional production free to the audience. The golden years of the Carnaval Latino were between 1989 and 1996, when Canal Street was filled with spectators from what is now Harrah's Casino all the way to the river. At that time, they presented internationally recognized folk groups, and masters of ceremony who would introduce great artists such as Rita Moreno, Celia Cruz, Johny Pacheco, Willy Chirino, Rey Ruiz, Las Chicas del Can and Wilfrido Vargas, among others.

The success of these initiatives has caused the desire of many people to carry out similar projects. "The saddest thing I have suffered in my whole life is to see the inability of our community to work together. This happened to Carnaval Latino...suddenly there were similar initiatives that wanted to imitate it, we asked them to stay with us, and we asked to work together...," recalls Gonzalez, pointing out the division of efforts and resources as the main reason for the interruption of the Carnival for several years. The division has been a big obstacle for good initiatives to be strengthened. At some point around five Latino-oriented Chambers of Commerce existed in the city, destined for the same purpose. One of the achievements of the second Jupiter Conference in 1995 was an agreement to merge all chambers into one to provide greater benefits for the members, and to represent the business community in a more unified, strong way. The result of Jupiter II was the Hispanic Chamber of Commerce of Louisiana, which is a very solid institution today. Carnaval Latino was revived in 2007 after Hurricane Katrina. On Saturday, October 13th, Carnaval celebrates its nineteenth edition. During this celebration, everyone will be able to enjoy dance performances and cultural events for free at Washington Park in the Marigny and they will also observe the traditional Parade of the Americas. The celebration will close with live music performances at the iconic House of Blues, during their regular Bamboleo! party! This exhibition of Latino culture will feature activities for all tastes of music and typical foods.

A book, his next step

Romi Gonzalez works constantly to expose the best of our culture in our society. The lawyer confesses that he is preparing a book to collect all the stories he has been involved with. Gonzalez is practically a living encyclopedia and is a chronicler when it comes to the history of our city, its connections to our community, and he knows very well the ties between New Orleans and his native Cuba. Speaking of the legal needs for the immigrant community, Gonzalez believes that "it is important to seek stability for the people who are already here and to show the rest of the community that an undocumented person is not a criminal." For the attorney, the term "undocumented" was sufficient when referring to those who are getting their documentation in order. Gonzalez rejects the term "illegal” and smiles when he mentions that he does not like the term 'alien', adding that "we must teach the rest of the community that we are part of them and not 'aliens'...we did not just fall from the moon."

Of his greatest pride, Romi Gonzalez does not say much. His eagerness becomes obvious when he meets his sons, Romi and Pablo, in his office on the twelfth floor of the Whitney building just in time for a family portrait. At some point during the conversation about Latin American culture, he mentioned that his late wife Sally Ann Howell, the mother of his children, was an American native of Monroe, Louisiana who greatly enjoyed traveling through various Latin American countries and learning about their different traditions. Gonzalez re-married and currently shares his life with his wife, Sara Lapene Puglia, a successful commercial manager, originally from Guatemala. For a brief moment, the respected lawyer, the entrepreneur and the executive, ceases to be all of this to become simply a father. Between the laughter and jokes with his children who pose for a photo, it is evident that Gonzalez has truly achieved a successful life.