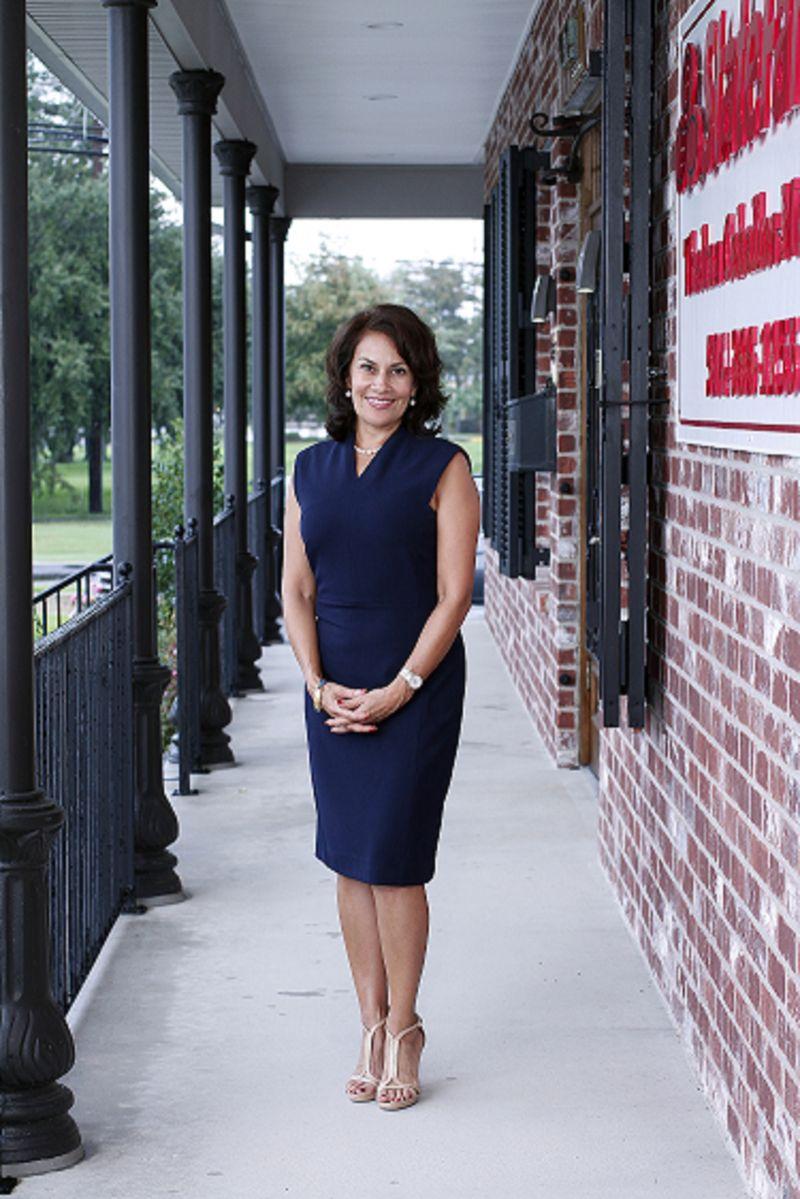 Chances are that you have driven by one of the many billboards with her name and face on display, but what you don’t know is that to get all this recognition and achieve success, there have been great sacrifices.

Ceballos-Meyers “did everything backwards,” she claims, when referring to the fact that she had a baby at 16, finished high school two years after, and got married years later. “I did not become a statistic,” is what she prides herself on when reflecting on her accomplishments and analyzing the outcome of many other teenage mothers.

Ceballos-Meyers is a very energetic person with a great smile all the time. She is a hands-on type of boss who will greet you in the office, serve you water, answer the phones, and close shop. Even after a steady business and a good financial position, she gets in early and stays up late if necessary. When business is slow, she joins her team to hand out flyers from door to door. Ceballos-Meyers does not sit still.

She met her husband Craig Meyers when she worked at the Sheriff’s Department. After working there for a while, she wondered what else she could do to end the paycheck to paycheck financial cycle. She attempted to be a medical assistant, but cleaning wounds was not for her. She really wanted to be a court stenographer, but classes got canceled because enrollment was low. She then moved on to work as a secretary at a State Farm Agency. Always the hardest working person in the room, Ceballos-Meyers kept looking for a way to bring more money home.

“When I tell you, I couldn’t buy a pack of gum, that is an understatement.” As a single parent, Ceballos-Meyers had to work hard to provide for her daughter Jessica. For many years, they had just enough. “People live a lifestyle that they cannot afford, but they miss what’s more important,” and for Ceballos-Meyers, providing a good education for her daughter was priority. She chose to pay for private school and forgo nice things for herself like a better car or an expensive handbag.

Being a young mother grounded her. Going out was not an option because even though she found a great support system in her parents and grandmother to help with her child, they would only take care of Jessica for work and school-related activities.

While working at State Farm, Ceballos-Meyers began realizing that agents could earn good salaries. In her former boss she found a mentor and a voice of encouragement who kept reminding her that she had all the capabilities to become a successful agent. State Farm paid for her school, so she attended Tulane University, where she got an associates degree in Business Administration and Marketing. 2007 was the year she graduated, and the year she became a State Farm Agent.

Ceballos-Meyers had a lot of encouragement and support from her former boss, but she also heard negative reasons from other agents as to why she should not attempt her own agency. “There are no clients, they used to tell me. I said, let me figure that out.”

Ceballos-Meyers had noticed that in her area there was no one tapping into the Hispanic market. After Hurricane Katrina there were so many questions about insurance. People, including herself, were so confused with coverages, and she noticed people in the Hispanic community were totally lost. She was ready to fill a need while also carrying out her mission to educate her community.

“State Farm gave me the opportunity, and I was willing to out-work anybody else that they were going to give it to.” On December 1, 2007, just a few months after becoming an agent, she opened the doors to Thelma Ceballos-Meyers State Farm Agency, along with three full-time employees and her daughter, who worked part-time.

“There was no Latina State Farm Agent. I’m the first, and still the only one after 10 years. From day one our goal was to educate our clients about their policies and the financial services.” She knew her grandmother and mother were known in the community, so she dragged them to all her events, and that’s how Ceballos-Meyers began to market herself.

Ceballos-Meyers believes in brand recognition and early-on she advertised in various media while sponsoring several community events. After just three years in business, she opened the doors to her new beautiful facility on 501 Whitney Avenue, where the agency has operated for the last seven years.

Ceballos-Meyers remembers the first agency years of 12 to 14-hour long days. She jokes about getting to work at seven in the morning and having moments where she would cry and pray that things were going to go right that day before getting out of her car. Having a supportive husband was key to her success and she makes sure to give credit to her husband Craig. “He knew I did not eat sometimes because I was so busy, so he would bring me lunch.” Together, they would clean the office every Sunday, and if something needed fixing, “Craig was my fix-it guy.” She is also grateful about having assembled a great team. “Team is everything. I cannot do this by myself,” she says and reassures that if anyone was to attempt their own agency, she would be happy to share her knowledge, but “the most important thing is to remember is that it takes a lot of work.”

Positivity and high energy are evident traits in Ceballos-Meyers. To relieve the mental stress from the job and to stay fit and healthy, she makes sure to work out every day. She started running in her 40’s. Now that her team is established, and business is steady, Ceballos-Meyers devotes some time to training and competing in triathlons, a passion she began at 44. “When you hang out with people who work out, they are so much more positive than people who don’t. Their outlook in life is so much different and I admired that, so I wanted to be like them, and I began to do triathlons.”

Ceballos-Meyers did not know how to swim well then, so she asked a lady at her gym to give her some tips. She ventured into her first triathlon where she had to swim 300 yards in a pool. “I was exhausted,” she laughs, while adding she still had to bike and run. But like with any other challenge in her life, she overcame and now competes all over the region.

Always learning new things and challenging herself is the way Ceballos-Meyers achieves things in life. In looking for ways to help her clients, she discovered AARP discounts. When she realized there were no Spanish AARP volunteer instructors in the state of Louisiana, she took charge, spent the time in training, and became one. She volunteers her limited off hours to provide free classes to adults aged 55 and over, who get a 3-year discount just by attending the class. “Which agent takes the time to tell you if you take the class you can save money?” Ceballos-Meyers asks while adding that the experience has helped her know clients better and people see her willingness to help.

Ceballos-Meyers gives back to the community in many ways. She has served on the boards of multiple organizations, including the Jefferson Workforce, the Hispanic Chamber of Commerce and the AARP Diversity Council, among others. She also supports many charitable community initiatives.

Ceballos-Meyers is in a happy place. After all the sacrificing during her youth to provide for her daughter, she can now devote time to her hobbies. She is an atypical grandmother of three, who enjoys spending time with her family. The New Orleanian, who is the second child of a Guatemalan father and a Nicaraguan mother, enjoys traveling and going to festivals. She loves to dance, even though she does not get the chance to do it that often. She eats healthy food, but can’t resist a Guatemalan breakfast with chirmol, black beans and hand-made tortillas.

Her goal is to keep her company going strong and to invest intelligently, so she can secure a decent retirement. She emphasizes the importance of planning for retirement and is happy to guide people in that respect. “Thelma actually cares,” Ceballos-Meyers says when asked about what people should know about her. She knows the importance of receiving the right advice and getting a helping hand. “I honestly want to help. If I can help within reason, I will.”

Our Purpose in Life

Summer Sunshine and Your Daily Dose: How to Obtain More Vitamin D