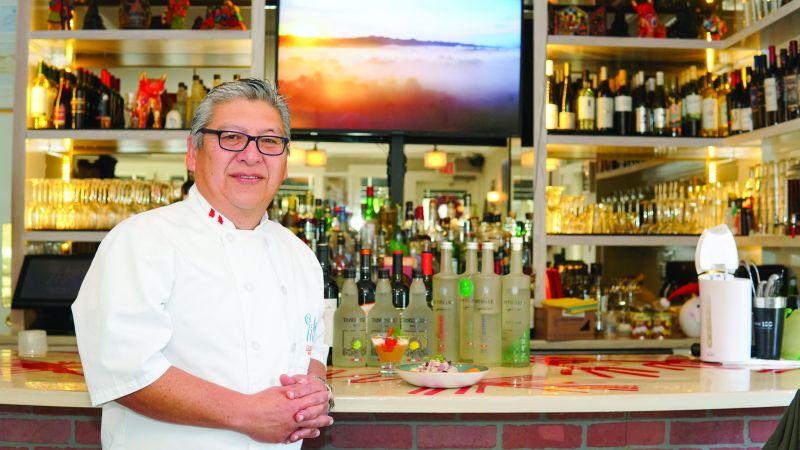 New Orleans is a tapestry of food cultures. From the earliest influences of Spanish, French and African cuisine 300 years ago, to the eventual introduction of Vietnamese, Italian and other European food identities, the weave is myriad and diverse. Our most famous Cajun and Creole dishes incorporate the flavors from all these ethnic groups and more, creating gastronomic experiences that are often imitated yet seldom duplicated.

Peru, like Louisiana, was developed by indigenous peoples, later colonized, and then inhabited by immigrants from around the world, creating a multicultural nation. Unlike Louisiana, it’s been around a lot longer than three centuries. The comestible customs of these societies are reflected in the cuisine of Peru, with aspects of Spanish, Asian and African cooking often sharing the spotlight with the Amerindian and Andean ways. It is befitting that Tito’s Ceviche and Pisco, the Peruvian restaurant helmed by Chef Juan Lock, would find its place in the New Orleans dining landscape.

Chef Juan, a native of Lima, Peru, is no stranger to the city. After managing a popular steakhouse in Fort Lauderdale, he returned to New Orleans, eventually opening Tito’s Ceviche and Pisco with his wife, Tatiana, in August of 2017. Cooking, he says, has always been a family affair. “I started cooking as a little kid helping my mother in the kitchen, and I really enjoyed it.”

Ceviche, widely considered to have originated in Peru (sorry, Ecuador), is the star of the menu, served alongside complementary seafood dishes that may be seared, poached or fried. When slavery was abolished in Peru in the 1850s, Chinese and Japanese immigrants flocked to the country in search of work. Finding the ingredients they usually cooked with to be unavailable in their new homeland, they adapted their recipes, which are now staple dishes of Peru known as chifa.

Chef Juan pays tribute to his Chinese heritage with the lomo saltado and chaufa de mariscos, essentially a stir fry and fried rice, respectively. Japanese influence is represented with the tiraditos, which resembles a thinly sliced crudo but is more akin to sashimi. Perhaps one of the most fascinating aspects of Peruvian cuisine is the presence of ancient foods and the crops that are thought to be native to Peru; tomatoes, quinoa and most varieties of potatoes have been traced back to the country’s earliest years.

Peruvian food may not have always been on the radar of New Orleanians, but the appreciation for fresh seafood, if nothing else, is enough of a reason for locals to embrace it. Chef Juan realized an opportunity in New Orleans when he couldn’t find the dishes he was searching for. “In Peru, you will find cevicherias with lots of varieties of ceviches. It’s a lot of fun. We wanted to share some of that with New Orleans, to offer other Peruvian dishes, and a full pisco bar. New Orleans has great local seafood, which makes it easy to create a bridge between Peru and this wonderful city.”

-NOLA Eats is Leslie J. Almeida, food and dining writer and native New Orleanian. As the host of dozens of curated culinary experiences, she aims to highlight the people behind the city’s most interesting dining destinations. Since 2003, her past work includes contributions to Forbes, Food Network, CNN and Gambit. Tell Leslie where you’re eating and drinking -- she’s @nola.eats on Instagram and Facebook.

More in this category: « South of Eden A Conversation with Chef Adolfo Garcia »