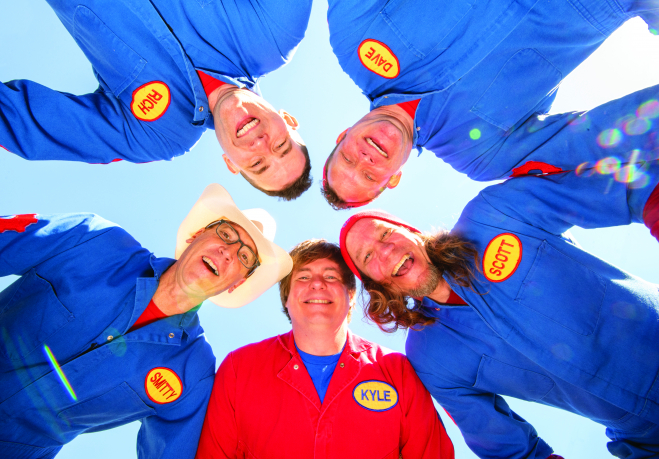 The guys who like to figure things out are back!

The guys who like to figure things out are back!

The city of New Orleans is always brimming with history, culture, cuisine, art, and music. People around the world have experienced its unique sounds of Jazz, Blues, Bounce, Brass, Hip-Hop, Zydeco, and much more. We can thank countless musicians such as the famous Louis Armstrong, Irma Thomas, Trombone Shorty, to name a few, for being an inspiration and for sharing their universal legacy. There is also a unique local music band that’s been “Brainstorming” for years and awakening the imagination of kids around the world. Dave Poche, Scott Durbin, Rich Collins, and Scott “Smitty” Smith are four “goofy” friends from Lakeview, Mid-City and together they are the Imagination Movers. We shared a cup of coffee with Smitty while he told us their success story.

“Everything had gone to animation or puppets, there were no people.” The idea of creating the group was born in 2002 at a friend’s birthday party. Their show would be about four friends who work in an “Idea Warehouse.” This warehouse is a metaphor for the child’s mind to solve problems. Mover Smitty remembered, “the first pilot script was about helping a child decide between a healthy snack and junk food.” Next came creating the music. They wrote three songs, “Snackin ABCs,” “My Favorite Snacks,’’ and “Good Ideas.” These became their first album called “Good Ideas.” This album later added other songs like “I Want My Mommy” and the fan-favorite “Brainstorming.” After putting out the record, selling it, and giving it to friends, their popularity grew, not only locally but regionally. The attention allowed them to create and release their first DVD, which was recorded during a live performance at the UNO Lakefront Arena. The DVD made it to Burbank, California, thanks to friends and opened the door to The Walt Disney Company.

Right from the start, the four movers knew how to “Reach high, Think big, Work hard, Have fun.” Their partnership with Disney helped them gain popularity in Europe and Latin America. According to Mover Smitty, their time at Disney brought them “one of the most fun creative challenges that they had” when writing songs for their television show. After 3 seasons, they began touring around the country.

The “Movers” are a real example of perseverance and resilience. Like many musicians in this business, they had to face some challenges and obstacles. However, they never lost sight of what their brand is all about: Kids. “Kids were being treated as consumers more than anything,” said Smitty. “We wanted kids to have fun using their creativity and using their imagination to solve problems.” It was importanto to the movers “not to play down to the kids, to play on their level, not to dumb down the music.”

The Imagination Movers have been “organic from the start.” All this is reflected in their more than 200 songs, television shows, concerts, and music videos. Their Facebook page has served as a way to stay relevant and to continue connecting with their audience. There, you can see them rehearsing and “goofing around” live. Their brotherhood is so strong that when they get together with their instruments, voices, and songs, magic happens, and you can really see their passion.

The Movers and their iconic blue suits are back with a new album called “Happy to Be Here” which includes five songs, “Happy,” “Robot Breaks Down,” “Leaves Fall Down,” “My Dog,” and “Alligators are Cute.” “Happy to Be Here” is a beautiful, fun, and very clever album that was born in an Airbnb in Manchac, Louisiana, literally, in the swamp. “We went there and brought our instruments. It’s almost like we were sequestered, it’s like, okay, we are here for a reason,” Mover Smitty recalled. 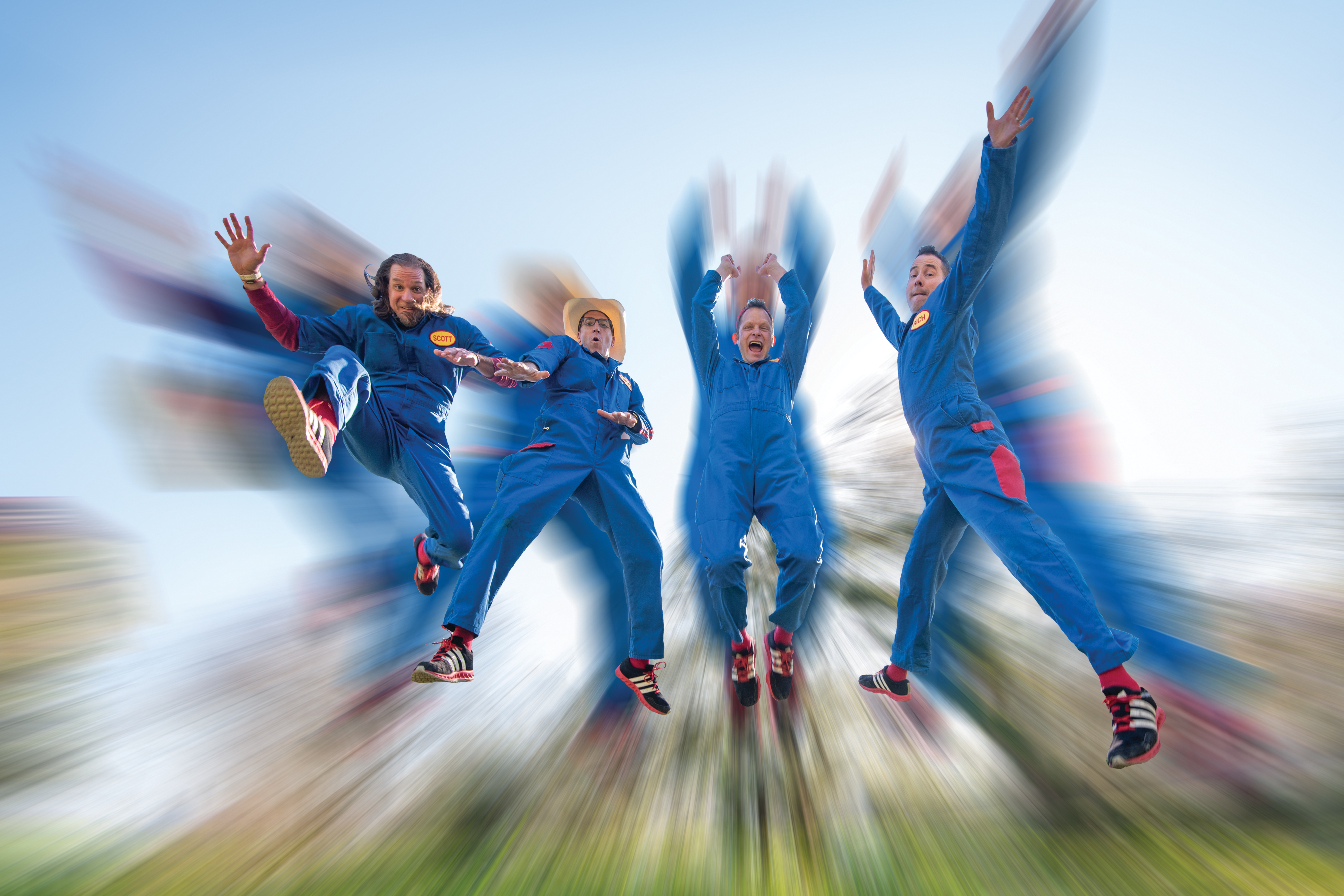 There’s no doubt that their “Big ideas” and inspiration for their new songs are, like the rest of their work, a group collaboration. An example is the lyrics from the song “My Dog,” in which each Mover wrote their own verses about their pets. “So, these lyrics are true, we are all dog owners, except for Dave who’s a cat owner, which is hilarious,” Smitty commented. “Scott’s dog Hershey, his dog pees when you pet him. When I come home my dog picks up a shoe, and brings it to me,” he added smiling. The song “Robot Breaks Down” is one of Smitty’s favorites, he describes it as “It’s just so poppy, candy goodness.” The video for this song was filmed in City Park and was directed by Abby Collins, Mover Rich’s daughter.

What is in store for the Movers? As true New Orleanians, their love for the city, their community, and their passion for music motivate them to keep moving forward. And the Hispanic community is no exception. For their 20th anniversary in 2022, the Movers have a surprise, and in a sneak preview, they told us that it includes Spanish language content. “We’ve been working on a song - tentatively titled Te Digo Que Te Amo (De Muchas Maneras) and we’re also looking to re-record Brainstorming in Spanish. For us, we are aware of our impact and how what we’ve created resonated with our Spanish-speaking fans. It’s our goal to respectfully recognize our fan base as evidenced by our desire to give back even as we create.”

Mover Smitty finished off this interview by giving a special message to the community: “If you are passionate about what you want to do, just do it! We just kind of believed it and we worked to push it along.”

You will never know where that idea could take you and if you need a little inspiration just look at the Imagination Movers.

*** The Imagination Movers television show, which originally aired on Disney Junior from 2008 to 2013, is available again on Disney+.

Malbec: The variety that found a new home in Argentina 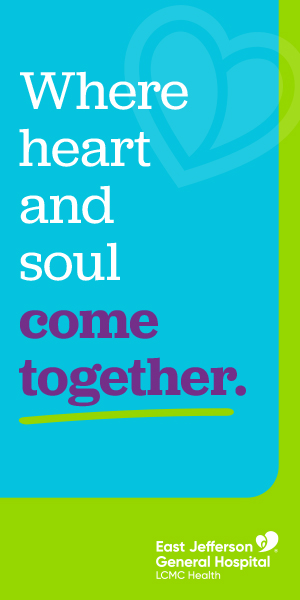