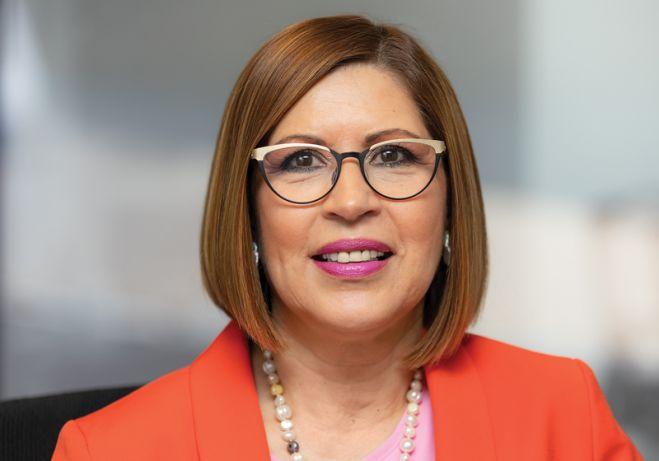 From the 10th floor of her Poydras office, Mayra Pineda directs all the efforts of the Hispanic Chamber of Commerce of Louisiana and its Foundation. The Honduran native moved to the city in 1980 when her mother widowed and decided to try a future with her young children in New Orleans, where she was offered a position with the Consulate of Honduras.

Pineda is no stranger to hard work. Pineda held jobs in the service and tourism industries. She worked for a Honduran airline, the Hyatt and Double Tree Hotels, among others, and was herself an entrepreneur managing a franchise restaurant for 25 years.

Her poise, elegance and demeanor make a lot of sense when one finds out she followed in her mother’s footsteps and became the Consul General of Honduras. Pineda master the art of diplomacy, a relevant skill for her current endeavor where she must mingle with government officials, business leaders, and members of the Hispanic Chamber who come from diverse backgrounds.

Throughout her career she has been involved in the business community and served on the boards of various organizations. She volunteers her time with other organizations because through serving she also gets access to networking opportunities and to interesting insights that can be applied in her leadership position.

After serving on its board for many years, Pineda was named President and CEO of the Hispanic Chamber of Commerce of Louisiana and the Hispanic Chamber Foundation in 2014. She had a head start on this role because as the president of the board, she had a very clear idea of how the chamber needed to address the need of its members.

Pineda turned around the organization which is evident in the growth of membership, the sponsorship from corporations, the involvement of the National Hispanic Chamber with local events, the monthly seminars, conferences and trainings offered, and the recognition by government officials who are aware of the economic impact of Hispanic entrepreneurial efforts.

Last May, Pineda was named with the Minority Business Champion by the Louisiana Economic Development and the U.S. Small Business Administration. The award was given at a ceremony at the Governor’s Mansion. Pineda had to rush to it in a marathonic effort after leaving the very successful Annual Women’s Business Symposium that was taking place the same day.

Even though this isn’t the only award the she has received during her presidency, this one “touched my heart. It summarizes in three words what we are trying to do--be a champion for small businesses,” said Pineda.

In her day to day, Pineda attends several events. From business breakfasts to evening galas, she makes sure she attends and supports as many events of other organizations as possible. She understands how much work goes into creating these events and how important it is for people to attend. Hector Pineda is a great supporter of his wife. He copes well with the fact that sometimes the businesswoman gets home late at night just to sit at her computer to take care of pending items. He supports her and accompanies her when required and according to Pineda, he is happy to see her succeed. The fact that their son Hector Rodrigo Pineda is already married, makes it easier for Pineda to focus on her job and to put in the extra hours required to lead a successful chamber of commerce.

One her short-term goals is to increase participation of members in the chamber’s events. Belonging to any chamber of commerce is essential for anyone wanting to run a business.  “The more businesspeople unite in this or other organizations, the bigger impact we create for others to take us into account”, says Pineda.  “I understand small business owners get absorbed with the day to day operations, but it is important to step outside and attend the events” explains Pineda.

Members get the most from the chamber when they make the effort to participate, when they make connections with other business people and when they find out about available resources. “Stepping out allows for the growth of their company and the chamber allows this opportunity,” she affirms.

Capacitation with the National Hispanic Chamber has been a great resource. Through this relation Pineda has been able to put Louisiana on the radar for big corporations that were not listening at the local level. Benchmarking with chambers from other cities has also fostered ideas and programs that have been successfully replicated in Louisiana. This becomes essential, especially as New Orleans celebrates 300 years and is in a great moment for economic development.

“Our geographic location and diverse culture makes New Orleans a gem” adds Pineda. The attraction of investments from technology companies, the relatively low cost of living, and the many events in the city are attracting young professionals and entrepreneurs. New Orleans is the place to be, according to Pineda: “We have the best food in the world, a unique lifestyle with diverse festivals, an unmatched geographical location. I love living and working here.”

Interacting with people, being up-to-date on what’s happening in the state regarding economic development and being able to pass that information to the chamber’s members provides great motivation for Pineda.  She is the happiest when she sees one of her members get the benefit of doing business and growing their company thanks to a connection that the chamber facilitated. One example is Juan Barreto from Promo Ad and Orleans Embroidery who met corporate representatives through the chamber’s events and is now fulfilling large contracts with Entergy and Blue Cross Blue Shield, to name a few.

“I’m satisfied personally and professionally. I have a lot of fuel to keep going and want the chamber to continue to grow” says Pineda. Just as the Chamber accomplished the goal of opening the Bilingual Workforce Training and Business Development Center, Pineda’s long-term goal is to create a Business Development Center for Women Entrepreneurs, and idea that is in the works and that came from the connections made at the National Hispanic Camber level.

Pineda would like all professionals and entrepreneurs to join the growing Hispanic Chamber of Commerce and to participate in the events to take advantages of the opportunities and benefits that come with the membership.