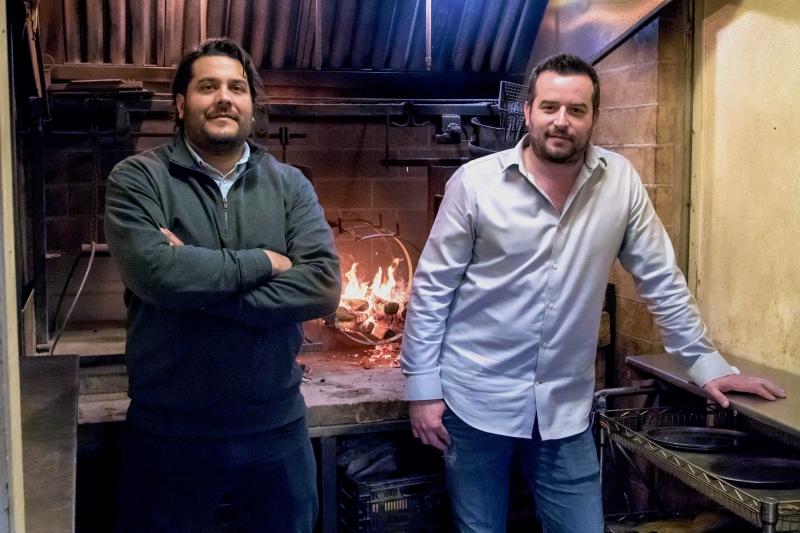 While attending Delgado Community College, Edgar Caro and Antonio Mata became close friends, which was preserved during their student years and strengthened as they grew as adults.

Mata, a Salvadoran native, focused on his education, continuing his undergraduate degree in Finance from the University of New Orleans. Even though he worked as a waiter during summers in Missouri, and at the restaurant Azul in New Orleans, his objective was always to find a job in corporate America and climb the corporate ladder.

As Mata attended college, a Chef was being made. Caro opted to use real world experience as his school and began working in the kitchen of Cooter Brown’s. It was there he learned the basics of the business. Caro worked in various positions and was quickly captivated by the service industry. He has fond memories of his experience at Veracruz, a restaurant that served the college crowd and a job where the owner trusted him to freely manage the place.

After other ventures, Caro was seduced by fine-dining during his time at the steakhouse The Living Room in Uptown. “I fell in love with that environment, with fine dining, with high end service, with bourbon and with fine wines,” confessed the Chef. Chef Caro later gained recognition with his hit Latin American restaurant Barú Tapas on Magazine Street. Inspired by the flavors of his native city of Cartagena in Colombia and refining his extensive knowledge in various areas of the business, with Barú, Caro revolutionized the expectation of Latin American cuisine in the city.

Antonio Mata watched his friend’s success while working as the manager of the French Quarter artisan stores Latin’s Hand. With his aspirations of growing in management, he went on to pursue an MBA. His other wish was to apply his business knowledge in a venture with his friend Caro, but there had been failed attempts at securing a venue.

“I had given up and thought my only option was to seek a corporate career in Miami or Houston. Two weeks before my MBA graduation, Edgar called me," said Mata, as he remembered how the opportunity to open a restaurant together finally came true. The Caro-Mata partnership was solidified with their first business, Basin Seafood & Spirits, where all finance theories Mata learned in school were tested.

Basin offered traditional New Orleans dishes--a category with fierce competition that forced the co-owners to find creative ways to stand out. Basin served as a training ground for the two men and made their partnership stronger. They learned essential industry lessons like the importance of consolidating a skilled kitchen team, and the need to design a delicious, but cost-effective menu. The administrator and the Chef realized catering to different crowds and experimenting with strategies to attract customers was necessary to survive. “We understood how to satisfy our customers without compromising our integrity,” explained Caro about turning the restaurant around while preserving his vision.

The partners overcame hardships with perseverance and dedication. A couple of years after opening, the Magazine Street restaurant became a favorite place for brunch, a preferred location for cocktails, and a main destination for fresh oysters. After the rigorous training at Basin, where Mata even learned to cook, the duo launched their second venture, Brasa Churrasquería last June.

This fine dining concept was ideal for the affluent crowd of Old Metairie, where the co-owners quickly seduced a clientele typically accustomed to European cuisine. Brasa Churrasquería is a South American steakhouse, the only one in town that prepares meat in a traditional firewood grill.

Brasa offers a farm to table experience daily with regional ingredients and Latin flair. The menu is not limited to signature premium cuts of beef, but includes lavish appetizers and meals with vegetables, chicken and fish. Everything can be paired with wine from the select list or with an exotic cocktail from the internationally stocked bar. “Our clients are a new generation of professionals open to trying new flavors,” explains Mata, who was pleasantly surprised by a crowd comfortable with sitting at the bar to enjoy cocktails and small bites.

In less than a year, Brasa Churrasquería has become one of the most desired restaurants in the area. It is a dream come true for Mata and Caro, who had long planned to develop a high-end concept that included traits of their cultural background and some of their favorite flavors. When questioned about what was in the works, Chef Caro quickly answered, "mi Mexican restaurant."

The duo recently traveled to the Oaxaca region and Mexico City for research and inspiration for their third and current project. Zócalo Cocina & Cantina is Chef Caro's concept of authentic traditional Mexican meals mixed with street food. A casual, hip atmosphere designed in the extinct Vega Tapas venue will offer hand-made tortillas, a variety of mezcal and tequila brands.

Zócalo caters to the young professionals and their families. “We are going to maintain fair prices and create a fun design for this place,” says Mata.

Zócalo Cocina & Cantina is sure to become the next quick success for these two hard-working friends. It will open late Spring.

More in this category: Mayra Pineda a Champion for Business »