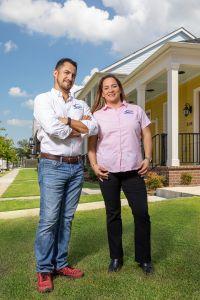 The Power Couple Behind Colmex Construction

Angelica and Roman sounds like two names in a love story from Greek mythology, just as Helen and Paris, or Andromeda and Perseus. But this 21st century love story is built -hammer and nails in hand- here in New Orleans.

Angelica is methodical. Roman is creative. She takes care of the numbers. He handles ideas. She likes administration and finances. He prefers the hands-on, technical part. She begins the sentences, he finishes them. Angelica, wife, is the president and Roman, husband, the vice president.

Parents of four children, Angelica and Roman are the Yin and the Yang. Angelica Rivera and Roman Lopez are the co-owners and founders of Colmex Construction, a construction company for commercial, residential and multi-family buildings that has membership in more than seven organizations and has been recognized with awards from Entergy and the Hispanic Chamber of Commerce of Louisiana.

The company has received multiple certifications, including the 10,000 Small Businesses of Goldman Sachs and one from the United States Environmental Protection Agency. In 2018, Colmex Construction celebrates ten years of being founded on June 2nd, to be exact. It was born with three workers and has grown to have 25 employees and 30 subcontractors. From a room as an office in the home of Angelica and Roman, today the company is located in a commercial building of 10 thousand square feet on 4334 Earhart Boulevard in New Orleans.

Originally from Cajicá, a town in Colombia, Roman was Angelica's first boyfriend when she was 13 years old. At 16, she emigrated to Florida: she finished high school, she started working in several companies, she continued her life in the United States... "but she remembered that she had left something good in Colombia!", Roman whispers, and both laugh.

Roman arrives later to Florida. Using his manual skills, he offers maintenance services and then home inspections. The housing crisis, the scourge of Hurricane Katrina in Louisiana and the invitation of a group of Mexican friends encourage Roman to move to New Orleans to work on the wooden structures of the houses.

He was not as fast as his friends, so he was advised to look for clients... and customers started arriving. "I almost panicked when I learned how they kept their accounts. That's when we decided to organize ourselves," says Angelica. That is how Colmex was born, a name whose first three and last letters are dedicated to Colombia and Mexico.

"There came a time when we understood that we could offer the complete construction service, from building the foundation to adding the final touches to the home," explains Angelica. They obtained the operating licenses, the appropriate permits and contacted non-profit organizations. Angelica says that "continuing education has been the key for growth. It is important that people educate themselves on how to grow their business and on the new techniques that exist within the industry."

Colmex Construction is a family-owned and family-oriented company, which instills a strong sense of belonging and creates spaces of motivation for its workers. Meetings are held every Friday, with lunch included. Recreational activities, such as games Olympiads, are also planned with employees. The company organizes and pays annual holidays with all employees and their families. Employees and family members will spend three days on the beach during the Labor Day weekend. "There are 57 people. We pay for the rooms. We've been doing it for five years now. It is a space in which we share with the children and the husbands and wives of all our employees."

Colmex Construction continues to grow every year, "but our goal is not to cover ourselves with money. Our goal is to continue managing this beautiful team we have," explains Angelica while Roman finishes the thought by adding that "the idea is to continue growing with the working group that we have formed. Many people have been working with us for 10 years. They are still here! It's about that, about valuing them and receiving that human warmth they provide.”

There is no need to look between the lines for a happy ending to this story. Upon hearing them, Angelica and Roman show the value of work, build the concept of family in the workplace, and are an example of a couple that advances in business and gives others the possibility to grow. They inspire love, understanding and a tenacious drive.