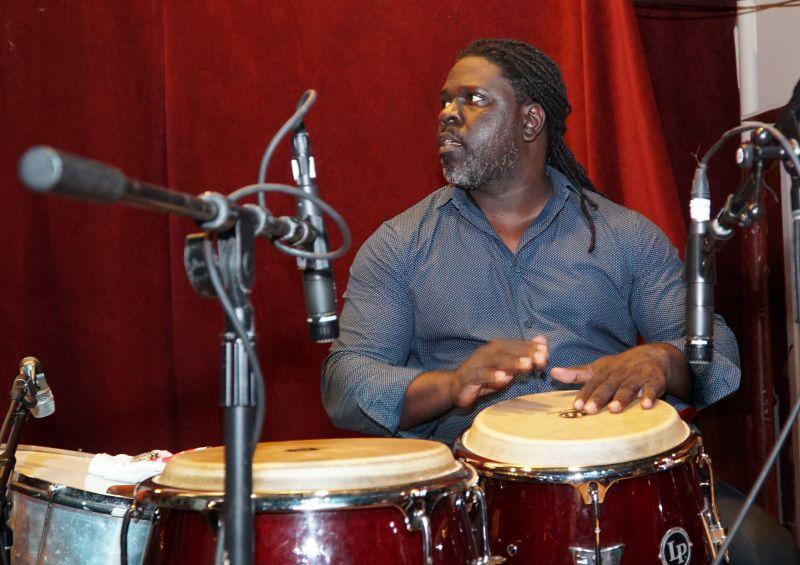 The World of Alexey Marti

The presence of Alexey Marti is impressive. He has a thunderous voice, he is a robust man with a guarded but kind smile, a sincere handshake, and a pleasant and entertaining conversation.

He arrived in New Orleans 10 years ago from Havana with the music of Cuba in his arms. Alexey is a percussionist and composer, and currently in high demand in the city.

He started playing the conga drums when he was a child within his family environment, sharing with his uncles, but he plays any percussion instrument placed in front of him.

He knows in depth the African traditions that are passed from person to person on the island. "I'm self-taught," he says. "I studied with Oscar Valdez, ex-vocalist and percussionist of Irakere." As if that training wasn’t enough, part of his education came by witnessing the rehearsals of the members of the renowned Afro-Cuban fusion band, and to rehearse by himself 10 or 12 hours per day. "The virtuoso becomes," he says with great confidence adding the saying "to eat fish you have to get wet."

Marti further studied in the jazz program at the University of New Orleans (UNO). At the close of this edition, he is putting the final touches to his second album, entitled "Mundo."

When asked about the focus of his new work, Alexey says that "it is an album of reuniting with the spirits. This work is more accessible, more folkloric, and it shows how many different things can be done with the root of music," he explains.

The 14 singles that comprise Mundo include compositions influenced by genres such as ballad, samba, bossa nova, and salsa, as well as traditional African, Haitian and Cuban rhythms.

"Anthropology plays a very important role for the musician," he emphasizes. The making of the album also reflects its cosmopolitan aspect, since it was recorded in New Orleans, Miami, New York, Havana, Brazil, Puerto Rico and Spain. The album is being published this November.

When saying goodbye, Alexey tells us that he has another album to come. It will be a salsa one this time, coming in January of next year, which clearly shows that he is a prolific creator. "A piece becomes universal when it can be played in different genres and cultures," he concludes by adding "and when it produces the same feeling in different people," Marti concludes.

More in this category: « Commemorating Caroling in Jackson Square »